GENDER AND SPORT: DEGENDERING IN SPORT AND SOCIETY

8.2.Ultimate Peace (UP) in the Middle East

Articles can also be downloaded from ResearchGate: https://www.researchgate.net/profile/Irene_Kamberidou/?ev=hdr_xprf

The Voices of Six Inspirational Greek Women in Sport: What inspired them to take that leap; the Obstacles they faced; how they moved forward and Tips for Success.  Many inspirational and outstanding women have made a difference in the lives ofgirls and women in sport, physical education (PE) and physical activity in Greece,despite their invisibility in the mainstream media, the life stories of which would need volumes. They succeeded in making a difference while respecting and celebrating  diversity with regard to gender, ethnicity, culture, disability, age and sexual orientation. Beginning with a brief discussion on the underrepresentation of women’s sports and the female athlete in the Greek media, this chapter shares the contributions of some inspiring and motivating Greek women in sport whose achievements have been excluded from the country’s mainstream media. It is through six in-depth interviews and follow-up meetings that we learn how these pioneers influenced the lives of sporting girls and women by daring to disregard social barriers and spread  awareness. We conclude the chapter with tips from these successful, namely  inspirational women, who all agree that success requires ethos and taking that leap.

Thousands of European and American women provided their services, lobbied, raised funds, food supplies and clothing to support the Greek Revolution.  Along with the relief activities of the 1820’s and 1830’s, the great interest in Greece produced a strong desire to send teachers and missionaries to Greece in Bondage.  Women’s 19th century accounts examine theposition of the subjugated Greeks in the Aegean Islands and Asia Minor. European and American women—educators and philanthropists—worked for the advancement of female education. They even established schools for the preservation of Hellenic cultural heritage. This paper focuses on the first-hand accounts of 19th century European aristocratic and middle-class women volunteers, and specifically their social contribution during the Crimean War (1853-1856), when the English and French colonial experience encouraged female volunteerism. It spotlights the social service provided by English, French and German nurses and philanthropists—as agents of social change—who cared for the soldiers in the hospitals of Constantinople and its environs, concluding with their invaluable recommendations. The female accounts describe the British military and naval hospitals, hospital huts, nurses duties and difficulties confronted (1,500 patients per 3 volunteers); the Women’s Hospital; the French hospitals; the French military system; the Sisters of Mercy; the Sisters of Charity; the women who followed their husbands to war, including thedestitute wives and babies of the English soldiers. Astonishing are the accounts concerning the degrading social status of the English soldier’s wife as opposed to the respect and protection enjoyed by the French soldier’s wife.

5. Kamberidou, I. (2017). The Multiethnic Slavery Institution through the Eyes of Western Women and 'the real position of women in the religious system of Islam'. In Miriam Diez Bosch and Jordi Sanchez Torrents (eds). Media, Religion and Gender in Europe (pp. 53-79), Second Edition. Barcelona: Blanquerna Observatory on Media, Religion and Culture. Faculty of Communication and International Relations, Blanquerna- Ramon Llull University.

6. Kamberidou, I. (2013). Women Entrepreneurs: we cannot have change unless we have men in the room. Journal of Innovation and Entrepreneurship, 2(6). [full pdf - women_entrepreneurs.pdf;   URL: http://www.innovation-entrepreneurship.com/content/2/1/6)

10. Kamberidou, I., Tsopani, D., Dallas, G., & Patsantaras, N. (2009). A Question of Identity and Equality in Sports: Men’s Participation in Men’s Rhythmic Gymnastics. The Routledge Falmer Reader in Gender and Education, 220–237. 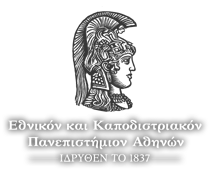